Universities – on Strike or at Peril? 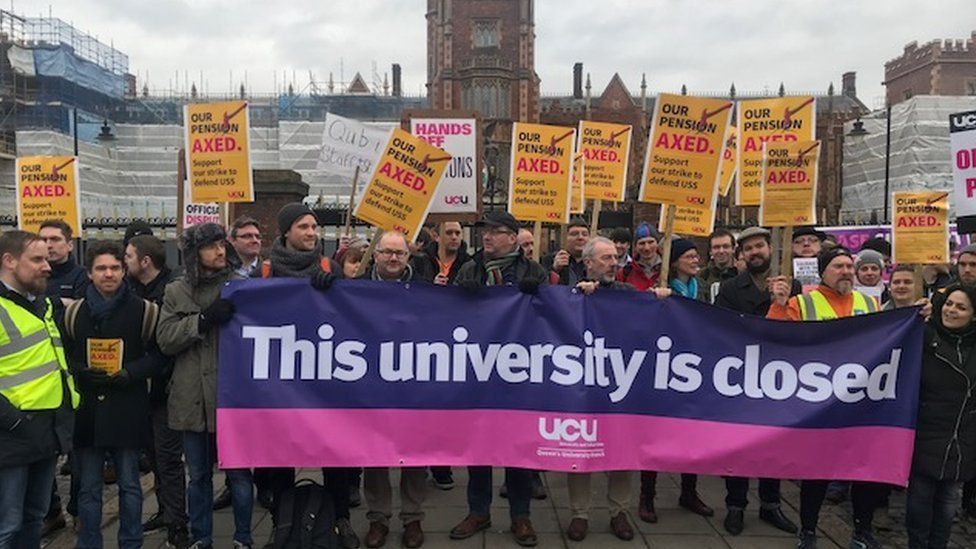 As students’ courses are disrupted by strikes, John Marenbon warns that academics who respond to the strike call, increase the threat to university education.

This week the annual University Strike Season began in earnest. The University and College Union has called two partly overlapping strikes, one about pensions, the other about pay, casualization and working conditions. As a result, in many universities union-supporting academics have not been teaching this week, nor will they teach on half the days over the next fortnight. Students unlucky enough to have loyal trade unionists as their teachers might find themselves, with nearly half their promised courses cancelled. Yet students show surprisingly little concern and the strikers have little of the aggressive energy that fired them three years ago. Some have found it a welcome opportunity for a half-term holiday; for others it is an excuse, like Eunice, to stay at home and transfer their teaching on-line (‘I don’t want to force my students to cross picket lines’ – though, from my experience in Cambridge, picket lines may be hard to find). The wider public is barely aware of the strikes, which are a non-story except on the UCU’s own website.

The students’ nonchalance is understandable. They have never known what it is to be taught regularly, devotedly and in person. Those in their second and third years have been kept away from their institutions for large parts of their precious university years. Even this year, students have been unable to benefit fully from the return to normal in the rest of society because universities had already decided to put many of their lectures on-line, whether through unnecessary caution or – more probably and sinisterly – because this is how the future of teaching is seen by an unlikely but powerful trio of interest groups.

First, there is the new caste of university administrators, non-academics who have put themselves into a position of power over the academic specialists, and who see pre-recorded on-line teaching material, owned by the universities, as a way of cutting costs. Then there is the new wave of research-focused academics, who resent giving up the freedom and time that regular, in person teaching requires. Finally, there is the UCU itself. Over the last two years, it has frequently resisted whatever half-hearted attempts were made by universities and permitted by the government to provide in person teaching. And now it is doing incalculable harm by calling on its members to strike, at the very moment when every academic should be intent on restoring pre-pandemic routines of regular teaching before they disappear entirely from the collective memory.

None of this is to deny that the concerns behind the strikes are important. Without the generous pensions of the past or a compensating rise in salary, university posts in the UK are starting to look unattractive both internationally and in comparison to other jobs. Rather than acting as a magnet to global talent, Britain may lose its own best academic minds to other careers or other countries. What UCU calls ‘casualization’ means that, instead of becoming pupils of the leading specialists on whom the reputation of an outstanding university depends, students are for the most part taught by stand-ins. These temporary or casual staff, ruthlessly exploited, to the detriment of their own work, may well be clever and enthusiastic, but they lack the particular cultivation of mind that comes from long years of study, from mastering a discipline rather than still being, as their substitutes are, apprentices in it.

The UCU’s rhetoric of ‘employers’ and ‘university workers’ will only exacerbate these problems. Universities proper are self-governing associations of teachers and those they teach, bound together in a common pursuit of knowledge and, ultimately, wisdom.

They differ from the many training institutions also called universities, some of them excellent, which provide undergraduate and postgraduate professional training for a range of careers from accountancy to law. For many students these institutions will be the first choice or the best one, in order to prepare themselves for a particular career.

But Britain is fortunate to have a number of great, traditional universities, where students are, or used to be, formed by the contact of mind on mind. They combine learning, teaching, scholarship and research  in a way that cannot be packaged in the neat formula of online lectures. They will survive only if those inside as well as outside learn to recognize why they are uniquely valuable.