UK divergence from EU science: How could Brexit unleash greater innovation to benefit business, consumers, health and the environment? 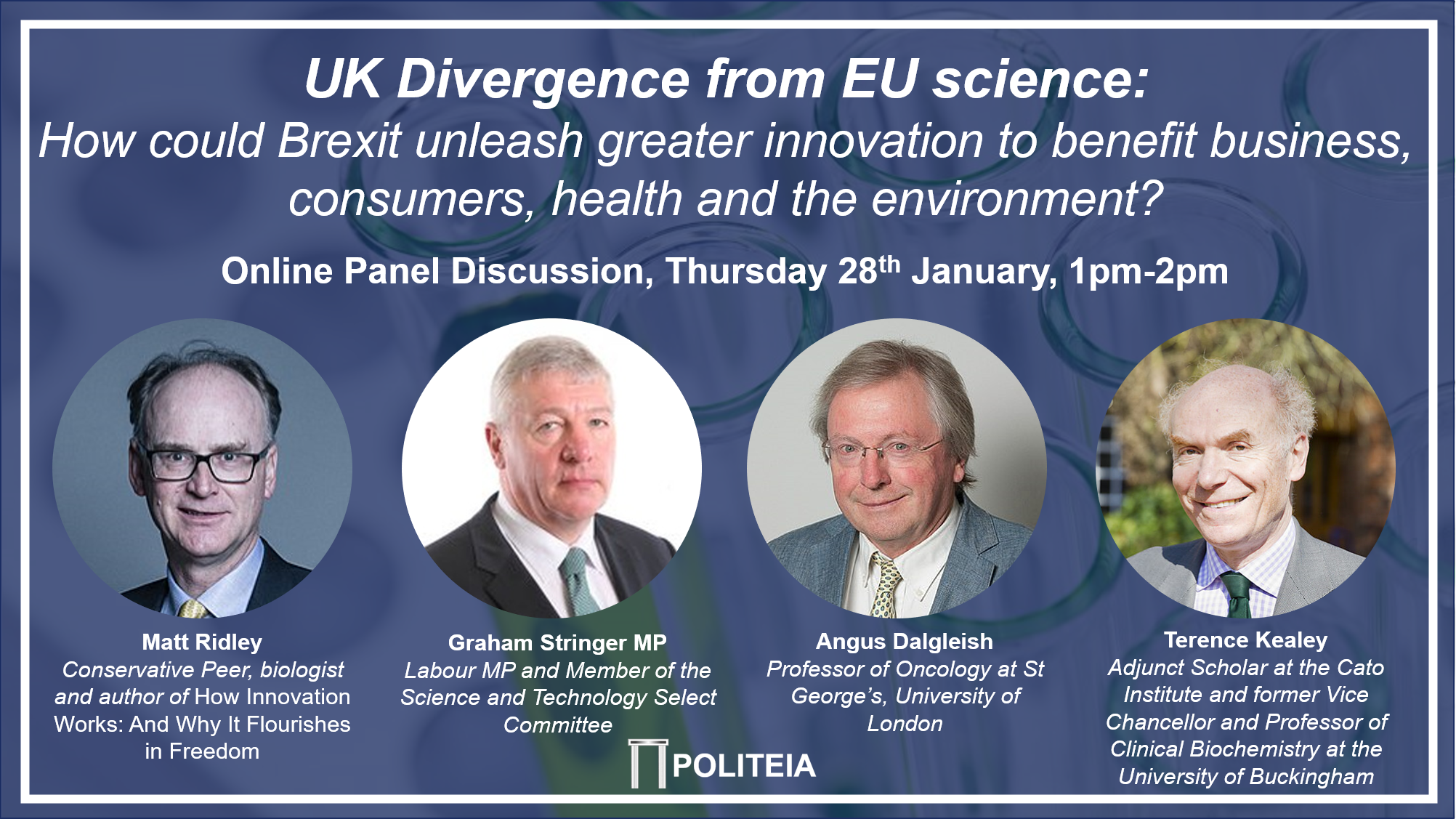 You are invited to the following online panel discussion:

To be chaired by Jonathan Isaby, Director of Politeia

In recent weeks we have witnessed British authorities approving and delivering the COVID-19 vaccine at a far greater pace than their European Union counterparts. And following the UK’s withdrawal from the EU, the opportunity presents itself now to diverge from existing regulations covering science and technology, raising a number of pertinent questions:

We have assembled an expert panel of speakers to discuss these issues:

Matt Ridley – A biologist, journalist and award-winning author who has sat in the House of Lords as a Conservative peer as Viscount Ridley since 2013 and backed Vote Leave at the 2016 referendum. A Fellow of the Academy of Medical Sciences, he is a former Science Editor of The Economist and author of numerous publications including How Innovation Works: And Why It Flourishes in Freedom.

Graham Stringer – A Labour MP since 1997, representing the Manchester seat of Blackley and Broughton, he served as a junior minister in the Blair Government and currently sits on the House of Commons Science and Technology Select Committee. Prior to entering Parliament, he worked as an analytical chemist in the plastics industry and was Leader of Manchester City Council. He was active in the pro-Brexit group, Labour Leave.

Angus Dalgleish – The Foundation Professor of Oncology at St George’s, University of London, he is a Fellow of the Academy of Medical Sciences, the Royal College of Physicians and the Royal College of Pathologists. He sits on eight editorial boards and is the co-editor of five medical books. During the EU referendum he was a spokesman for the pro-Leave Scientists for Britain, having contested Sutton and Cheam for UKIP at the 2015 General Election.

Terence Kealey – Currently an Adjunct Scholar at the Cato Institute in Washington DC, he was formerly Vice-Chancellor and Professor of Clinical Biochemistry at the University of Buckingham. Having initially trained in medicine at Bart’s Hospital Medical School, London, as a clinical biochemist he then studied human experimental dermatology and his publications include The Economic Laws of Scientific Research.

We hope you are able to join us online for this event at 1pm on Thursday 28th January which will take place via Zoom. Please follow this link to register to attend and email secretary@politeia.co.uk if you encounter any difficulties with registration