When Donald Trump on 15 June, 2015, announced that he intended to run for the Republican nomination, almost no one took him seriously. The major political commentators all suggested that he was an entertainer, a superficial media celebrity, whose efforts would be a flash in the pan, and that he could never capture the nomination and certainly never, never become President.

He has certainly already both won the Republican nomination and destroyed the Republican Party. He also stands a better chance of entering the White House than most commentators think. It is obvious that extreme statements about women and Hispanics and Moslems have put off many potential voters; and equally that efforts to make good the damage have added to the alienation. It did not help his popularity among female voters to say that ‘I like women’. Social conservatives and feminists alike are unlikely to thrill to the follow-up: ‘All of my women, past and present, know I like women. In fact, I love women’. And Hispanics will not see Trump’s gesture of eating a taco on Cinco de Mayo as an embrace.

One of the most useful – and most discussed – political indicators tracks negative sentiments. No presidential candidate has ever had higher negatives than Trump. But Hilary Clinton also scores unusually high poll negatives. The most peculiar, and most uncommented on, aspect of these polls, however, is that in most recent cases, including George W. Bush in 2004 and Obama in 2008 and 2012, the candidates with the most negatives won the election. 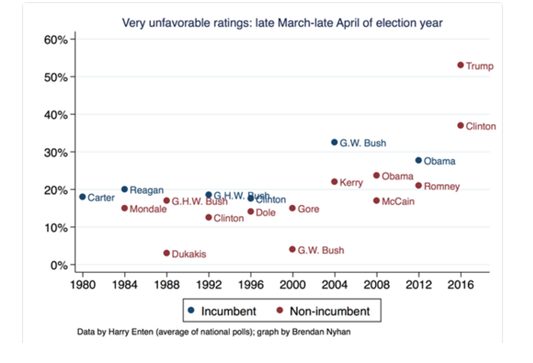 This graph also shows how weak a candidate Hilary Clinton is, a point that the Dartmouth political scientist Brendan Nyhan, who put together this chart, has been making for years. In particular, it is arithmetically impossible for her to put together a winning coalition of Hispanics, African-Americans and educated people (including many mainstream Republicans). Trump’s appeal to many working class and middle class Americans who feel that they are losing out because of technology and globalization is simply too powerful.

There may also be some Trump supporters who make a more substantive case, that having an unpredictable and even apparently irrational leader is a way of strengthening a bargaining position. Game theoretical insights suggest that in transparency and a willingness to gamble for high stakes increases the chance of a positive outcome. In Europe, the brief tenure of the Greek Finance Minister Yanis Varoufakis was characterized by a remarkably unsuccessful attempt to apply this initiative to European bargaining. Trump would be doing wild politics on a global stage.

In other words, the strong negatives of Trump don’t matter. They are an indication of a candidate that is making a powerful and emotional impact. They are also the logical outcome of the polarization of American politics over the last decades, a polarization that started with Democratic attacks on President Reagan and his Supreme Court appointments, went on with Republican attacks on Clinton, the Clintonistas preemptive disdain of George W. Bush, and the often racist attacks on President Obama.

The Trump candidacy might well be successful. But the ‘Trump won’t make it’ case sometimes goes even further. He can’t be the candidate. Then: So what if he is the candidate, he can’t win. Then: so what if he’s President, the checks and balances that the Founders wisely built into the constitution mean that actually he can’t do anything. And if he did, he would face impeachment for abuse of his powers.

There are all kinds of obvious limits. The Mexicans are not going to pay to build a high wall. The military and the CIA cannot legally follow orders to apply torture. The independence of the Federal Reserve is protected by law.

The optimistic view on Trump in the White House may be comforting, but it is not quite right. Even a few weeks of a Trump presidency would be disastrous. It would make the point that critics of the United States and its role in the international system have long been making: that the United States is not reliable or predictable, that its treaty commitments to Europe and Japan are valueless, or even that its debt is not secure. In the past days, Trump indicated that he would use his experience as the ‘king of debt’ to win some sort of discount on American public debt. That move might well blow up the world’s financial system. Electing Trump would be a sure sign not only that the American century is over, but also that the whole idea of a cooperative international framework is no longer workable. 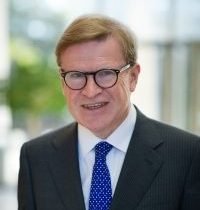