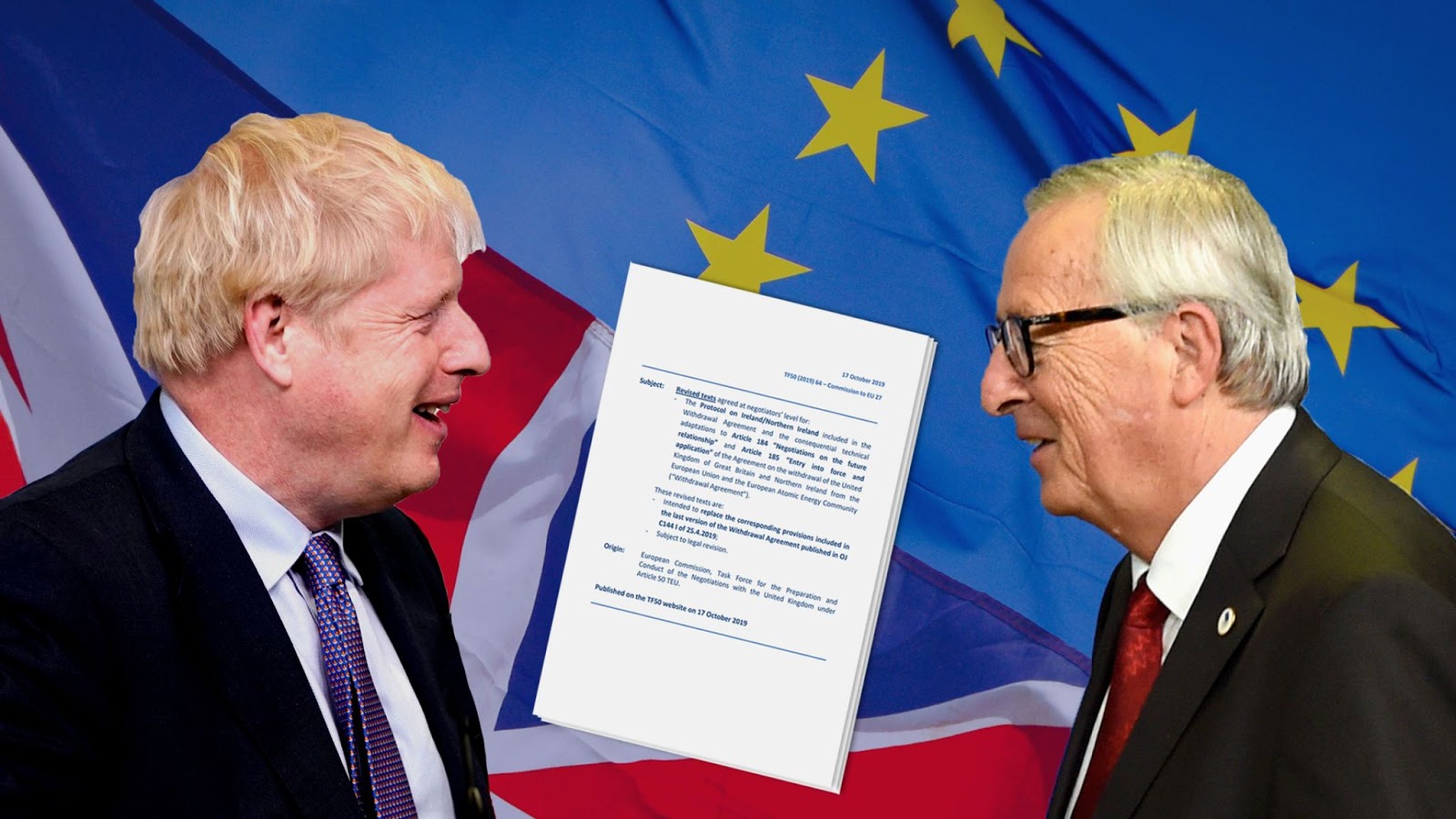 The Northern Ireland Protocol continues to disrupt trade and divide communities. Meanwhile the DUP threatens to withdraw from the power sharing executive. But, as Tom Sharpe QC explains, the UK can change matters and do so legally.

Silence and agreed extensions to the Northern Ireland Protocol may indicate that some progress is being made in renegotiating an agreement, which is plainly not delivering its objectives: a north-south border without infrastructure or border checks, though there is plenty of electronic form filling for tax and other purposes. But, contrary to the express spirit of the agreement, that the Protocol should “…impact as little as possible on the everyday life of communities” in both the Republic and Northern Ireland, its operation has disrupted trade and divided communities within Northern Ireland.

The EU’s key objective was to protect the “integrity” of the Single Market. Until details emerged of the agreement this was understood to mean that goods capable of being exported to the Republic (“at risk”) would be subject to scrutiny. No observer, in the UK at least, envisaged that each and every movement of goods passing between Northern Ireland and the UK would be subject to the same scrutiny as if it came from a third country into the EU, that is, with no allowance made for the unique position of Northern Ireland. It seemed irrelevant that trade between GB and Northern Ireland was four or five times the volume of trade between the north and the south, and that there are established relationships in place to ensure no “leakage” – obvious enough in “own branded” goods sold in retailers not trading in the Republic. Instead, negotiating under duress and with the “backstop” template under the surface, the UK signed an agreement which refuses to recognise the reality of the position and, in practice, affords primacy to the north-south relationship, at the cost of undermining the constitutional and economic integrity of the UK. It is little wonder that it has caused civil disorder and threats to withdraw from power sharing and other forms of cooperation.

Nonetheless the Protocol also provides for a solution. Article 16 contains within it the means by which this can be resolved, in the absence of agreement. This provision was unwisely, illegally and temporarily invoked by the Commission, to justify controls over vaccine exports. It sits in the agreement under the heading “Safeguards” and applies if the Protocol leads to “serious economic, societal or environmental difficulties which are liable to persist, or to diversion of trade.” This can be invoked unilaterally by either the EU and UK, subject to certain conditions and prior warning and it must be what is “strictly necessary” to remedy the situation. Moreover, it can attract retaliation from the EU. At best, it is a temporary safety valve but better than nothing.

Such a step should be distinguished from unilaterally rewriting the Protocol or “walking away”, as the Government is occasionally accused of threatening. Nonetheless the position is clear: if riots and threats of withdrawal from power sharing do not constitute serious societal difficulties it is hard to see what will.

The trade picture reveals a further complication. There has been a very significant increase, of 43 per cent, of trade from the Republic to Northern Ireland, which may well be the result of difficulties faced by Northern Ireland traders in continuing to secure supplies from Great Britain. So, in response they source from the Republic. (CSO, August 2021). Placed in context, overall UK trade to the Republic has fallen by 32 per cent while trade from the Republic to Great Britain (i.e. ex-Northern Ireland) has increased by 20 per cent. In relation to food and live animals, UK exports to the Republic almost halved in the year to June 2021. This may well reflect the asymmetry in inspection regimes: food and live animals are all subject to “third-country” inspection in Ireland, but the UK has not yet introduced sanitary and phytosanitary inspections (SPS). In addition, there is now ample evidence that many GB companies have ceased to supply Northern Ireland: it is not worth the bureaucratic bother and expense.

This is “trade diversion” on a significant scale and is a situation which cannot persist. The Government’s proposals to resolve matters were set out earlier this year in its Command Paper 502 ( July 2021). Article 16 would be the last resort and would not be invoked if a consensual solution was reached. However the UK’s July shopping list is a justifiably ambitious one: first, it seeks a requirement that only goods “at risk”, that is, destined for the Republic, would be subject to detailed paperwork; secondly, the existing UK SPS regime is robust and could, with minimal changes, be adapted to the Northern Ireland situation; thirdly, eliminate most detailed goods declarations for goods flowing from Northern Ireland to GB (why should these be checked at all given that if they are destined for the EU they will be subject to checks then?); thirdly, introduce a dual-regulatory regime so that goods which meet UK but not EU standards would be labelled accordingly, and vice versa, so that goods never destined for the EU do not need to meet EU standards and if they did “leech” into the Republic they could easily be identified. This issue is especially acute in pharmaceutical approvals. Lastly, very tendentiously and contrary to normal international practice, Articles 12(4)-12(7) confer rights on EU institutions to enforce elements of the Protocol. This includes jurisdiction the Court of Justice. Allowing the organs of one party to an international agreement to exercise final judgment in the event of any dispute is unusual, if not unique. The UK wants to bring this into line with international practice and in trade dispute matters in the Trade and Cooperation Agreement, and allow arbitration or something similar.

Given the very serious consequences of procrastination and failure to resolve matters there are good reasons for the UK to seize the opportunity offered by Article 16. The Commission contends that it reached the outer extremity of its indulgence and cannot understand why an agreement signed so recently should be amended so soon, if at all. Moreover, the Republic is plainly profiting from the trade fillip, filling the gaps left by GB traders who have withdrawn from the Norther Ireland market or are trading at a disadvantage owing to onerous and expensive formalities. In the background is the EU: it would very much like to remedy the position by the UK agreeing to follow it in relation to standards and EU law, so effectively resurrecting the backstop.

It is difficult to be optimistic. For the EU, Northern Ireland is a weapon in the battle to force the UK to follow the EU goods rulebook and possibly to achieve other objectives, notably defence and security. For the Irish Republic, whose economy is boosted by the trade diversion, there is no economic incentive to arrive at a more balanced solution and perhaps every reason to prolong the troubles. Unless agreement can be reached very soon, the UK has little choice but to invoke Article 16, as Boris Johnson anticipated in February this year, in order to ‘ensure that there is no barrier down the Irish Sea’. The practical steps have been mapped out in July’s Command paper. Otherwise, the economic consequences will risk being permanent. But perhaps the more important impact will be the effect on the status and identity of Northern Ireland and the divisive impact this will have on all parties within the island of Ireland.

Thomas Sharpe QC is a barrister at One Essex Court. He specialises in all aspects of EU, Competition Law, WTO trade disputes, UK regulatory proceedings and investigations and commercial judicial review. He appears in the European Courts, the CMA, CAT, and UK High Court and has been called to the bar in Hong Kong and in the Caribbean. He has recently advised on many aspects of Brexit and acted in the Miller case in the Supreme Court. For Politeia he was author of Commercial Law Post Brexit: Next steps for the UK (2018).

Thomas Sharpe QC is a barrister at One Essex Court. He specialises in all aspects of EU, Competition Law, WTO trade disputes, UK regulatory proceedings and investigations and commercial judicial review. He appears in the European Courts, the CMA, CAT, and UK High Court and has been called to the bar in Hong Kong and in the Caribbean. He has recently advised on many aspects of Brexit and acted in the Miller case in the Supreme Court. For Politeia he was author of Commercial Law Post Brexit: Next steps for the UK (2018).