‘The UK and the USA: An un-special non-relationship?’, by Professor Jonathan Clark 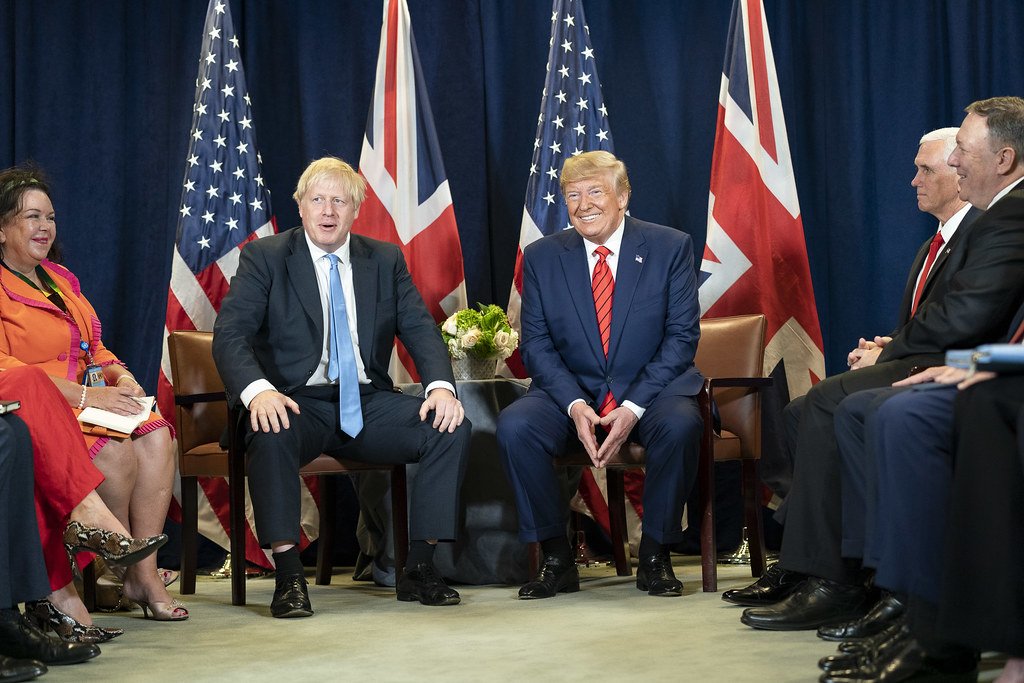 The UK and the USA
An un-special non-relationship?

Thursday 6th February 2020: In a week when US Politics commands the airwaves Professor Jonathan Clark* suggests that populism will continue on both sides of the Atlantic, but its specific expressions are likely to differ and remain unpredictable.

Prime Minister Boris Johnson, then, seems secure for one term, and may well make two. President Donald Trump will shrug off everything that the Democrats can throw at him in his first term, and may well win a second. If both strategies go to plan, what does the future hold? How will each leader deal with the other? What about that essential affinity with the US that the UK Foreign Office invented in the run up to 1914, and has been only occasionally glimpsed since the Falklands war?

Seen close to, chance rules all. In personal terms, the unexpected always happens. Both men are, fortuitously, left in positions of strength by the leaderless division of the opposing party. This may not last, since politics abhors a vacuum. An international pandemic, or the end of the great bull market, may turn President Trump into even more of a protectionist, Mr Johnson into even more of a globalist; or both may co-operate in the face of a common threat. A military clash between the USA and China, or Israel and Iran, may reveal that the UK has little ability to intervene militarily, and less will to do so; or it may reveal a Johnson who, the UK having left the EU, sees an even stronger need to back the USA than Tony Blair did over Iraq.

Seen in a longer perspective, the larger influences have much more force. But here the unexpected never happens. On the contrary, in the longer term everything seems impossible until it is inevitable.

Mr Johnson and President Trump are divided by much, but each has a desire to wage a culture war against what their supporters see as a liberal establishment. Yet in the case of Johnson, this conflict is defined not by himself but by his Remainer enemies. Rage, rage against the dying of the light! is their unavowed slogan. Ian McEwan has ranted against Brexit as ‘the most pointless, masochistic ambition ever dreamed of in the history of these islands’. He infers a necessary close alliance between Johnson and Trump, both exponents of the populist nationalism that McEwan sees as the enemy of his key term, ‘we’. A.C. Grayling has called for a constitutional revolution and a conversion to proportional representation to create a parliamentary majority eager to rejoin the EU. In resisting this mind-set, Trump can be of little help to Johnson.

But President Trump has no such foreign policy dilemma: the US has left the Paris accord on climate change, not some military alliance. He has promised disengagement from foreign wars, but seems always to be drawn back in by politicized Islam’s depiction of the USA as the Great Satan. In these essentially theological dilemmas Johnson can be of little help to Trump.

The USA is continually fighting its culture wars, but these are replays of the unfinished business of 1776 and 1861. With a few exceptions (the Vietnam War being one) Britons have very seldom intervened to any effect in American agonies over race relations, abortion, the place of religion in society, or the degradation of popular culture. With few exceptions (civil war in Ireland being one) Americans have seldom intervened effectively in domestic UK conflicts, notably those over class, universal healthcare or nationalisation. Both these long-term dissociations are likely to continue.

President Ronald Reagan and Margaret Thatcher had few deep reasons to hit it off; without Thatcher’s iron determination, the Falklands might easily have resembled Suez. One thing that President Trump and Mr Johnson share in strong measure is their unpredictability. Neither is confined by precommitments.

For both, style is everything, ideology nothing. Johnson is the most un-Etonian of Etonians, Trump the most unprofitable of property developers. ‘Populism’ is a term of abuse, beloved of the McEwens and the Graylings, that serves to disguise rather than to solve the long-term causes of localised economic failure and political exclusion in the two countries: the example of Trump cannot help Johnson, the example of Johnson cannot help Trump.

We may confidently predict that populism will continue on both sides of the Atlantic. But its specific expressions are likely to be very different, and wholly unpredictable. Paradoxically, randomness seems highly likely.

*Professor Jonathan Clark is a historian of Britain, Europe and America. He has been a fellow of All Souls College, Oxford and Peterhouse, Cambridge and has held the Joyce C. and Elizabeth Hall Distinguished Professorship of British History at the University of Kansas. His publications include A World by Itself: A History of the British Isles, (ed. and contrib.) From Restoration to Reform: The British Isles 1660-1832  and Thomas Paine: Britain, America, and France in the Age of Enlightenment and Revolution. He is a co-author of Politeia’s History in the Making: The New Curriculum: Right or Wrong? with David Abulafia and Robert Tombs, and of Triggering Article 50, Courts, Government and Parliament.