Sovereignty Matters! History, not law, should be our guide

On 23 June 2016, the UK left the EU. Three senior judges sitting in the High Court in London have this week decided otherwise. They have ruled instead that the government needs Parliament’s approval to trigger Article 50 of the Treaty of Lisbon (2009) and begin Brexit (expecting, say some, that the government would not receive it). Judges are lawyers, however, a profession which has argued since Dicey that a referendum is merely advisory and Parliament is sovereign: judges interpret the law that Parliament passes; they are rightly unelected and unaccountable. Whichever way they decide, for lawyers the legal position is always clear.

But for historians, great constitutional crises (like the civil war of the 1640s, or the American Revolution) happen in legal grey areas. Brexit, in turn, raises old questions of sovereignty exactly because they were never completely resolved.

Sovereignty is not like a gold bar, which resides in the vaults of one bank or another. It is a matter of opinion who or what holds it, and opinions have long been diverse. The people always had a role of some kind, expressed in the medieval notion of ‘the community of the realm’; popular approval was powerful in general, weak in particulars. The sovereign as an individual had a role, legally known as prerogative power; but monarchs seldom claimed to be absolute. The two Houses of the Westminster Parliament had a role; but even there, MPs have sometimes boasted of their accountability to their constituents, sometimes of their principled independence; some were placemen, others independents.

From at least the sixteenth century, a powerful doctrine was that sovereignty resided with that legal fiction, ‘the Crown in Parliament’ (just as a legal fiction in the US today ascribes sovereignty to another legal fiction, ‘We the People’). But this image did not explain the relative powers of King, Lords and Commons. William III, after the Revolution of 1688, ruled in an authoritarian manner like James II before it.  The Bill of Rights of 1689 (just misquoted in the High Court) was a political fudge, passed when no majority was possible for a longer or clearer list: it did not declare illegal the royal power to dispense with laws or the execution of laws, but only that power ‘as it has been used and exercised of late’. Today, ministers regularly circumvent Parliament, seeking to rule by Statutory Instruments as monarchs once sought to rule by Proclamations. Parliament tamely acquiesces. The idea that Parliament was ever simply ‘sovereign’ is an historical myth, and a bad foundation for law.

Now a new procedure has arrived on the scene: the referendum. Like all great constitutional innovations, it was an unanticipated consequence of tactical needs. Harold Wilson’s referendum on EU membership in 1975 alone set no precedents. But the AV referendum in 2011, the Scottish Independence referendum in 2014, and now the EU referendum have wrought a silent, unplanned revolution. A means now exists of giving expression to what can plausibly be called ‘the will of the people’. And with a majority of only 12, Theresa May has tactical reasons for talking up that interpretation.

Remarkably, many MPs within a few months came round, however reluctantly, to saying that they respect the will of the electorate (even if they seek covertly to frustrate it). The Labour majority in the Lords has backed away from a direct confrontation, rightly foreseeing corporate suicide if they do not. Without planning, without debate, a new reality has come into existence: referenda may ultimately trump parliamentary votes.

By contrast, the lawyers have been brought up with the old orthodoxy of parliamentary sovereignty. They have no pressing need quickly to adapt to political change. Yet they have slowly changed, not necessarily helpfully, for the High Court proceedings showed them moving away from the older English notion of rights as specific entitlements, legal because delivered by the sovereign, towards rights as metaphysical entities, ‘fundamental rights’ that (in their eyes) the EU somehow defends but Westminster does not.

What, then, can referenda do? When must they be held? Who can trigger them? Can they override rights? How do they relate to the judiciary, to the Westminster Parliament, and to the devolved governments? Nobody knows; and I predict that like all major constitutional issues, no definitive and permanent answer will ever be possible. But the genie has been let out of the bottle, and the bourgeois intelligentsia are not just unhappy to have lost; they are outraged, indignant that on 23 June they were symbolically repudiated by something they can hardly define. They are right to think this. But invoking ‘fundamental law’ does not solve their problem.

So the scene is set for a constitutional confrontation far more momentous than the last such clash, the ‘Peers versus the People’ crisis of 1909-11. That prolific author G. K. Chesterton is nowadays remembered most for two lines of doggerel verse: ‘For we are the people of England / That never have spoken yet.’ Perhaps they finally have. In the age of the internet, they may find that they can speak more often. 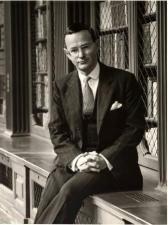