Peace in Ukraine – An Easter message of hope 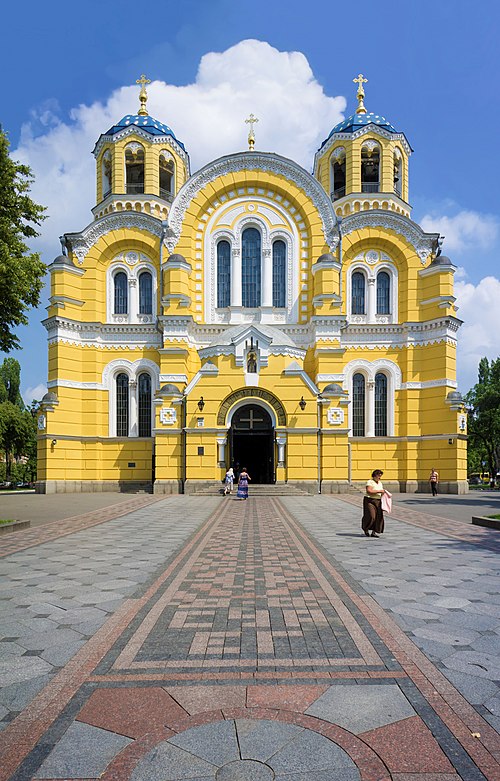 Murdo Fraser MSP reflects on the Russian invasion of the Ukraine and the consequences for the country from which Christianity spread to Belarus and Russia. For the suffering people of Ukraine the Resurrection brings its special message of transformation.

They won’t be celebrating Easter in Ukraine this weekend.  That is nothing to do with the terrible war raging following the unjustified Russia invasion, but a consequence of the fact that in the Eastern Orthodox tradition the date of this most important of Christian festivals is set according to the Julian, rather than the Gregorian, calendar. The Orthodox Easter will fall one week later, on Sunday 24th April.

It’s a celebration that matters there: the Ukrainian capital of Kyiv is held to be the foundation of Christianity across the modern states of Belarus, Russia and Ukraine. According to ancient tradition, it was St. Andrew who first took the faith to the area. It was not until the 10th century, however that the people of the Rus with their capital in Kyiv came to be Christianised, with the celebrated mass baptism of local residents. This led, in time, to the spread of Christianity throughout Russian lands, giving Kyiv the same place in the Christian tradition of that part of the world that we would hold for Iona or the Isle of Whithorn.

The Russian President Vladimir Putin claims to be a man of faith, with a strong devotion to the Russian Orthodox church. Commentators have suggested that part of his motivation for the invasion of Ukraine is an ambition to reunite the ancient territory of the Rus, and the city of Kyiv that is the cradle of Russian Christianity, with the lands that he now rules. Given the atrocities we have seen reported in Ukraine from his troops it would be particularly ironic if this war was being conducted in the name of Christianity.

Easter is a time in the Christian calendar where many will offer prayers for divine intervention, and this year there will be one plea above all from Christians around the world, and that is for peace in Ukraine. Christians believe, at Easter as at all other times of the year, that it is the Prince of Peace, the one who died and sacrificed himself to take away the world’s sins, who can bring an end to conflict, and grant comfort to those who are the victims of war.

It is not just peace that we should pray for this Easter, but also justice for those who have lost their lives, or who have seen loved ones taken away from them, because of the actions of evil men. Jesus taught us to love our enemies, but there is nothing Christian in the belief that evil should not be resisted.

In an era of moral relativism, it is unfashionable to talk about absolutes of good and evil.  But that is precisely what we are witnessing in Ukraine, where we stand unequivocally with those who have seen their democratic and peaceful country invaded by a neighbour, and havoc wreaked on innocent civilians.

We can look at the events in Ukraine and despair that such things could happen in our supposedly civilised continent in the 21st century. It was despair that Jesus’ followers felt, some 2000 years ago, when they gathered below the cross on which he was crucified, and met then at his tomb.  The one who had promised that he was the Messiah had just suffered the most agonising and humiliating death, and had left them without hope.

But the Easter story doesn’t end on Good Friday. It is fulfilled on Easter Sunday, when those same despairing followers rejoiced at the miracle they saw before them -the risen Christ resurrected, his sacrifice for the sins of the world now complete, and with his Kingdom at hand. Those same broken man and women would be transformed into the foundation of the most powerful belief system that the world has ever known.

However bleak our world might be, there is always hope for those who believe the message of the resurrection. This Easter, as we celebrate a week ahead of our brothers and sisters in Ukraine, that hope is more important than ever for those who suffer needlessly. We wish them in particular a happy – and peaceful – Easter.

Murdo Fraser is Member of the Scottish Parliament (MSP) for Mid Scotland and Fife Region since 2001. Since May 2021, he has served as Shadow Cabinet Secretary for Covid Recovery. and before that was Shadow Cabinet Secretary for Finance. By profession a lawyer, he practised as a solicitor in Aberdeen and Edinburgh before entering Parliament, latterly specialising in commercial law.

Murdo Fraser is Member of the Scottish Parliament (MSP) for Mid Scotland and Fife Region since 2001. Since May 2021, he has served as Shadow Cabinet Secretary for Covid Recovery. and before that was Shadow Cabinet Secretary for Finance. By profession a lawyer, he practised as a solicitor in Aberdeen and Edinburgh before entering Parliament, latterly specialising in commercial law.