Online launch of Britain’s Taxable Capacity: Has it Reached the Upper Limit? 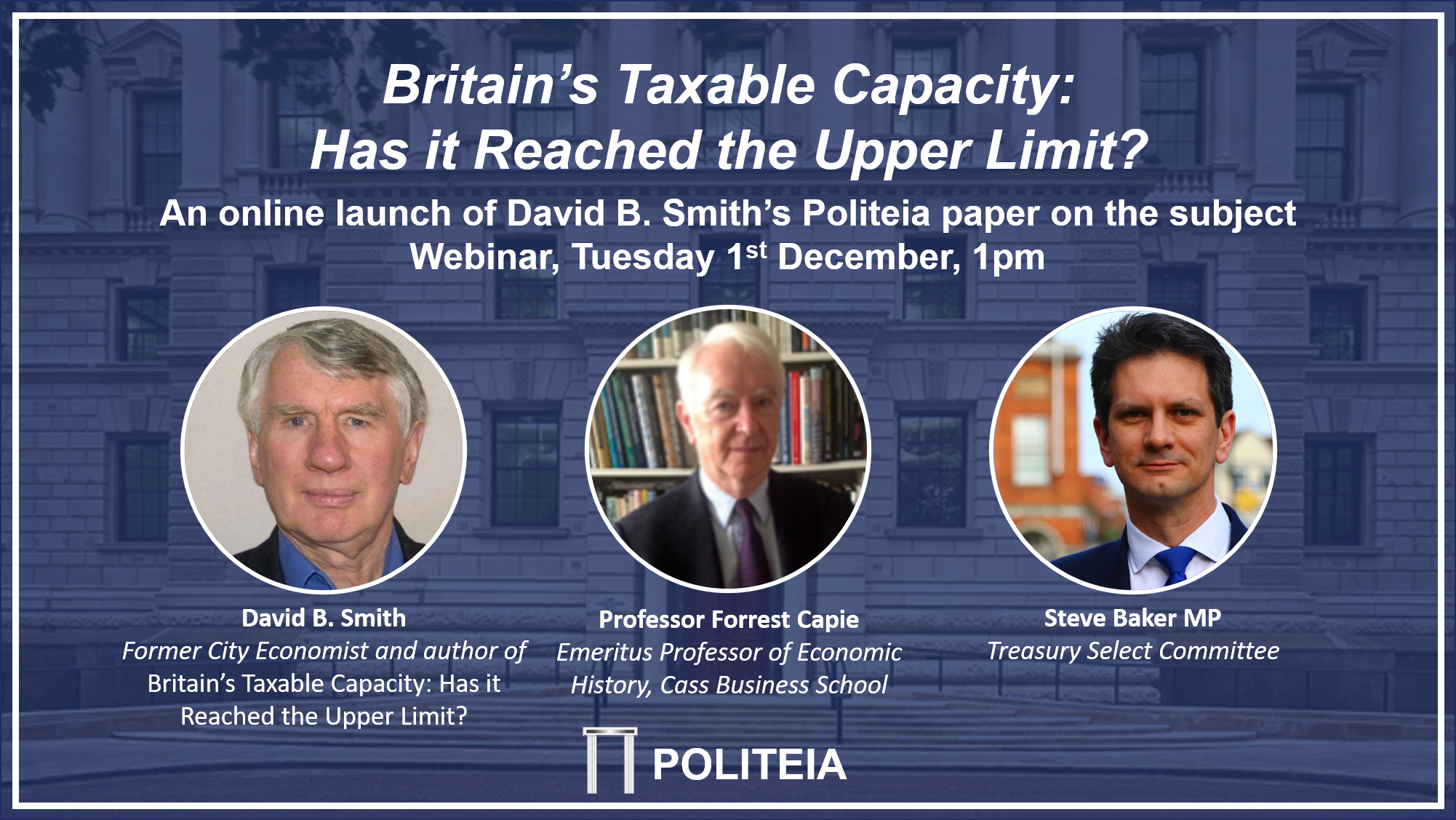 You are invited to the online launch of

Britain’s Taxable Capacity: Has it Reached the Upper Limit?
by David B. Smith
on
Tuesday 1st December, 1pm-2pm

With a panel discussion featuring:

To be chaired by Jonathan Isaby, Director of Politeia, with a response from Dr Sheila Lawlor, Politeia’s Founder and Director of Research

In his forthcoming Politeia paper, David B. Smith uses well over a century’s historic annual figures up to 2019 and quarterly data up to the third quarter of 2020 to consider the upper limit to UK taxable capacity – an important concept because it defines the upper limit of sustainable government expenditure.

At this online launch event – taking place the week after Chancellor Rishi Sunak’s Spending Review – David will summarise his findings, with two further speakers joining the panel to discuss the country’s taxable capacity and the sustainability (or otherwise) of the Government’s spending plans.

Our panel of speakers comprises:

David B. Smith – Author of Britain’s Taxable Capacity: Has it Reached the Upper Limit? and by background a City economist who worked as a macroeconomic modeller and economic forecaster. He was subsequently a Visiting Professor in Economic and Business Forecasting at Derby Business School, chaired the IEA’s Shadow Monetary Policy Committee (2003-2014) and was the Chief Economist working on the TaxPayers’ Alliance 2020 Tax Commission report published in 2012. He maintains his own macroeconomic forecasting model at Beacon Economic Forecasting.

Professor Forrest Capie – Emeritus Professor of Economic History at Cass Business School at City University and editor of the Economic History Review between 1993 and 1999. His recent publications include Monetary History of the UK (Routledge, 2015) and The Bank of England, 1950s to 1979 (Cambridge, 2012) while for Politeia he was co-author of Banking on Recovery: Towards an accountable, stable financial sector (2016).

Steve Baker MP – Conservative Member of Parliament for Wycombe since 2010 and a member of the House of Commons Treasury Select Committee for most of the last six years, although he served in government as Parliamentary Under-Secretary at the Department for Exiting the European Union between 2017 and 2018. Prior to entering Parliament he helped established The Cobden Centre to promote social progress through honest money, free trade and peace.

We hope you are able to join us online for this event at 1pm on Tuesday 1st December which will take place via Zoom. Please follow this link to register to attend and email secretary@politeia.co.uk if you encounter any difficulties with registration.