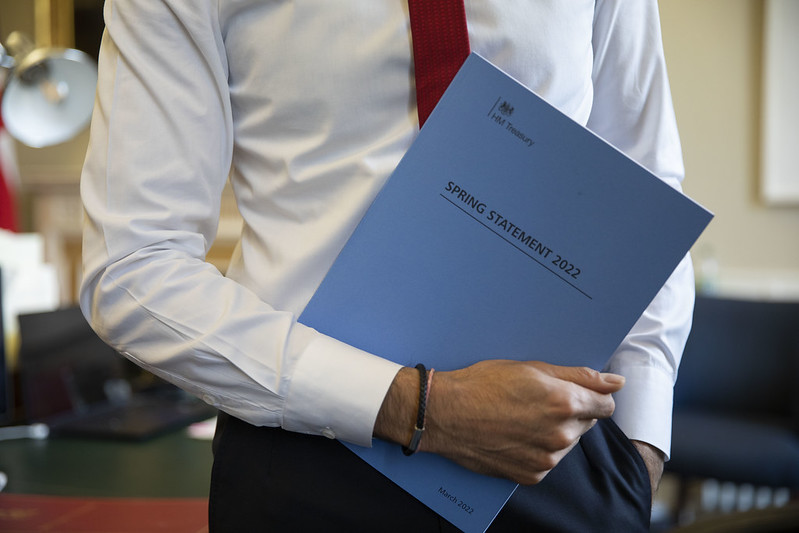 Though the Spring Statement highlighted tax cuts for fuel and NICs – by raising the threshold – and promised a cut to the basic rate of income tax by 2024, the big story is inflation. Rishi Sunak may for now be a lucky chancellor: inflation eats into the national debt and government bonds give a derisory yield, says Tim Congdon. But his luck will run out when government bond holders rebel to demand a higher yield.﻿

Statements from Chancellors of the Exchequer cause headline writers to go into overdrive. Drama and excitement sell newspapers, and facts and statistics do not. One result is that the underlying determinants of Britain’s public finances – notably the ravages of inflation – can be overlooked.

Rishi Sunak may seem to be Chancellor at a difficult time, as he has had to deal with the recent challenge of Covid-19 and now confronts the dangerous implications of the Ukraine invasion. In fact, he is an extremely fortunate Chancellor in one key respect. The Bank of England has warned that consumer inflation may be in double digits by the end of the year. As a result, every monthly announcement of the main price indices enacts a large change in the tax take. The increases in the consumer price index (and the retail prices index, as we shall see) are therefore more important to the sustainability of the public finances than today’s Spring Statement.

How is Rishi Sunak a lucky Chancellor? The answers are two-fold. First, inflation is proceeding at such a rapid pace that the real value of the national debt is being reduced sharply. The pubic sector net debt is about £2,350 billion, while it is increasing – because of the continuing budget deficit – by roughly £100 billion a year. Call the average figure £2,400 billion during the coming financial year, for the sake of discussion. About a fifth of the debt is index-linked, so that the nominal return to its holders increases automatically with the retail price index and these holders are protected against inflation. (Note that it is the RPI – not the CPI – that affects the UK index-linked debt, a legacy of past arrangements and contracts.)

That leaves 80 per cent of the debt – over £1,900 billion – in so-called “conventional” form, where the eventual repayment will be in the same pounds and pennies as specified at issue and no protection is given against inflation. Obviously, a 10 per cent rise in the price level is equivalent – as far as the holders of this £1,900 billion of conventional debt are concerned – to a reduction in the real value of their asset of about £190 billion. Indeed, if inflation nudges above 10 per cent, the nice round figure might be £200 billion.

Is this an invisible tax on them? Well, in a mere one-year period they are undoubtedly worse off by that amount. Moreover, in some sense “the government is better-off” and its Chancellor of the Exchequer can enjoy it. He can smile, as he does not have to announce a visible tax of the same size which would – almost certainly – be very unpopular. Given the media hubbub about the National Insurance increase, planned to raise a mere £12 billion a year, he may reflect that inflation is a superb tax collector.

Secondly, savers have not retaliated against the inflation tax by demanding a much higher yield on their government bonds. In the mid-1970s, when Britain was widely believed to face double-digit inflation into the indefinite future, the yields on long-dated government bonds (or “gilt-edged securities”) peaked at over 16 per cent. Today they are still under 2 per cent. Frankly, the yield is so derisory that Mr Sunak and his successors – perhaps in cahoots with the Bank of England – have a pernicious incentive to organize even more inflation. (As index-linked gilts had not been introduced in the 1970s, yields of over 16 per cent were necessary to persuade anyone to put their trust in the British government. With a number like 16 per cent, they had a margin of safety against inflation in the low double digits. Remember that 27 per cent inflation was recorded in summer 1975.)

Suppose that the Bank of England remains as incompetent as it has been in the last two years and continues to allow such fast growth of the quantity of money that double-digit inflation becomes entrenched. (I don’t expect this, but it must not be ruled out.) Then investors in UK government debt will again want yields in double digits so that they can secure a positive real return. With the conventional national debt at about £1,900 billion and rising – more or less – by £100 billion a year, what would the debt interest bill be if the interest rate were 16 per cent? Clearly, it would be over £300 billion, more than the cost of the National Health Service and over three times all public expenditure on education.

A welcome emphasis in the Spring Statement was on the need for the public finances to be resilient, where the notion of resilience is code for the UK’s future ability to keep deficits down even if the debt interest bill soars into the stratosphere. By contrast, Mr Sunak in his recent Mais lecture professed a commitment to lower taxes, not to strong public finances and sound money. For any responsible investment manager, obliged to look after his or her clients’ interests, this balance between sound finance and low taxes is not mere rhetoric. Rather it is a vital consideration in assessing the yields that government bonds must provide to ensure a positive real return.

Every British government should try to maintain a reputation for good housekeeping and financial prudence. In his 2022 Spring Statement Mr. Sunak may have pleased the headline writers with his gesture to lower prices at the petrol pump. But his luck will run out if holders of British government debt make a more effective protest against being cheated – as they were in the 1970s – by the inflation thar results from shoddy and irresponsible fiscal and monetary policies.