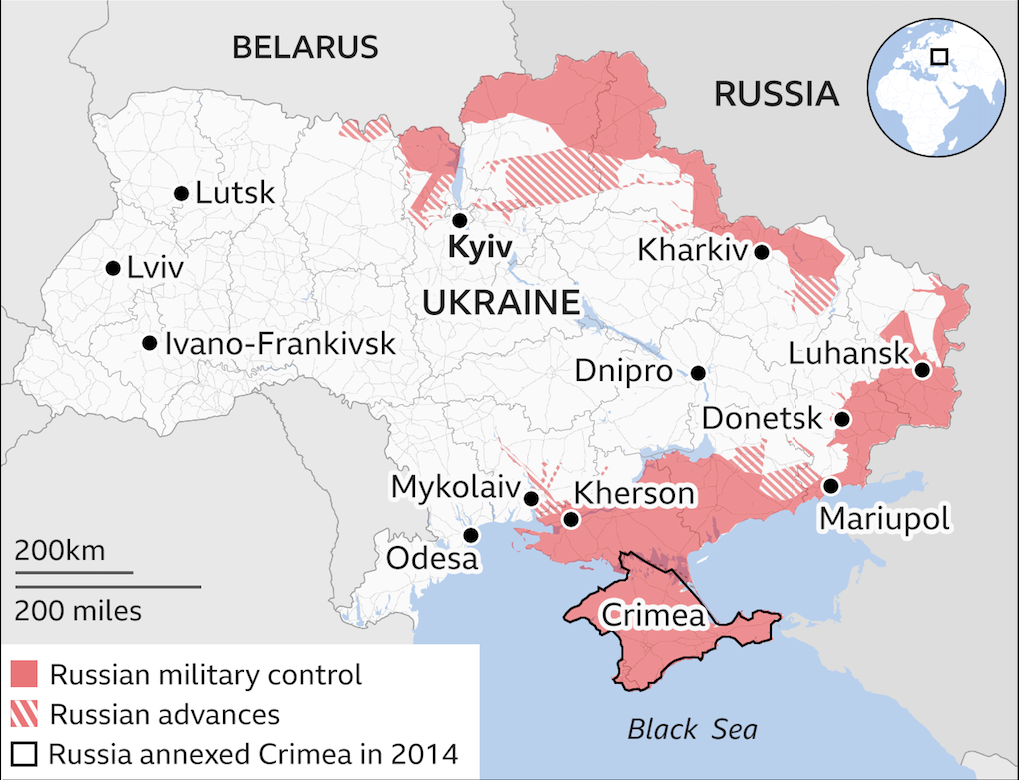 The Russian attack on Ukraine shows no sign of abating. This week’s direct talks between the two foreign ministers, Russia’s Sergei Lavrov and Ukraine’s Dmytro Kuleba, brought little apparent respite. Russian demands that Ukraine disarm, that it becomes a neutral state, so abandon its wish to join NATO, and that it recognise the independence of the two eastern breakaway states, Donetsk and Luhansk, have been rejected. To Ukraine accepting them would be a surrender. But, says Kuleba, Ukraine is ‘ready to seek balanced diplomatic solutions to this war’.

From Ukraine’s battlefronts to the north and south, politicians, soldiers and civilians speak with one voice: they will fight on, protect their homeland, protect their families and, they say, they will win.  They urge NATO to do more than send military supplies and escalate sanctions against Russia’s rich list and prominent businesses. They want it to enforce a no-fly zone over the country to protect their people from Russian air strikes.

Ukraine’s President, Volodymyr Zelenskyy, spoke by link to the House of Commons on Wednesday.  His sought to echo Churchill’s rhetoric of defiance in the 1940 speech made when Britain faced an imminent German invasion. This week MPs thronged the crowded chamber, rising to their feet to cheer, in what served as a gesture of political support to add to the supplies and the sanctions.

The UK government and the governments of other NATO countries have, however, ruled against a no-fly zone. Were NATO to enforce one, its forces would be engaged in combat against Russian forces and might provoke a world war. What, then, should Britain’s policy be beyond the politics of gesture, and beyond offering humanitarian aid, weapons and imposing sanctions on Russia? Such measures can be used to buy time, to keep up the morale of a beleaguered ally while the fronts are reinforced. But there needs to be an end in view beyond merely preventing defeat. Maybe the hope is that a protracted war will see Putin fall. But, much though Putin is hated, his fall, especially if sudden, might bring further instability, without settling the underlying issues.

Such an aim should guide British policy on this complex issue, rather than Churchillian rhetoric or the sympathy that we all feel to the Ukrainian people in their plight, and revulsion at Russia’s methods of combat.

Russia’s attack on Ukraine reflects the failure of diplomacy to resolve what are known as ‘Russia’s security concerns’.  Of these the Kremlin has made no secret.  Sergei Lavrov repeated the formula on Wednesday. Russia wants Ukraine to remain neutral, outside NATO and it wants the independence of Ukraine’s breakaway territories to the eastern states, Donetsk and Luhansk recognised. In short Russia wants security on its western border stretching to the north to Belorussia and the south to Crimea.

Ultimately, the war now in Ukraine is over the balance of power. The post-war balance sheet agreed by Churchill and Stalin in October 1944 would give Russia its ‘sphere of influence’ in eastern Europe, in Bulgaria, Romania, Hungary and with shared influence over Yugoslavia though Poland was not agreed. It is not surprising that Stalin was given such an extensive buffer zone. In June 1941 Germany had attacked its ally, Soviet Russia.  In the years that followed, 25 million people lost their lives in the Russian struggle to repel the Germans. The buffer zone was Stalin’s insurance policy against another invasion from the west. Since 1989, Russia has had to accept a changed world, in which these former client states have been allowed to link themselves militarily and economically with Western Europe. For the same to happen to Ukraine might seem, not just to Putin, but also to saner members of Russia’s ruling elite, a step too far.

In fact, although they will not admit it, the NATO governments do not disagree. It is almost unimaginable that there would be the required unanimity among the 30 members to allow its entry, and the UK and the US would both probably be against it. NATO does not want a war with Russia, but the acceptance of Ukraine as a member would increase the likelihood of one. It would also undermine co-operation, economic and otherwise, at a time when Xi Jinping’s China seems a more intractable problem for the West than Putin’s Russia.

In the end the war will end through tough diplomacy to bring the security on which future stability rests, for both Russia and for the West. Such diplomacy will secure the restoration of Ukraine’s independence, but most probably without the breakaway the eastern states of Luhansk and Donetsk, and without Crimea. Such an agreement will also probably make explicit in some way what NATO already believes: that Ukraine should not join it in the foreseeable future.  Responsible and realistic diplomacy by the US and its allied might have secured a settlement on these lines before thousands of Ukrainian civilians and soldiers, and Russian conscript soldiers, were killed, millions of Ukrainians forced into exile, and Ukraine’s cities reduced to rubble. Such diplomacy is far more difficult now, when understandably no one wishes to let Putin gain any trace of victory from his aggression, but it would be aided if Western governments realized that the road to long-term peaceful relations between Europe and Russia, and that to an end to the terrible suffering in Ukraine, lead in the same direction.