Calling Time on the Protocol 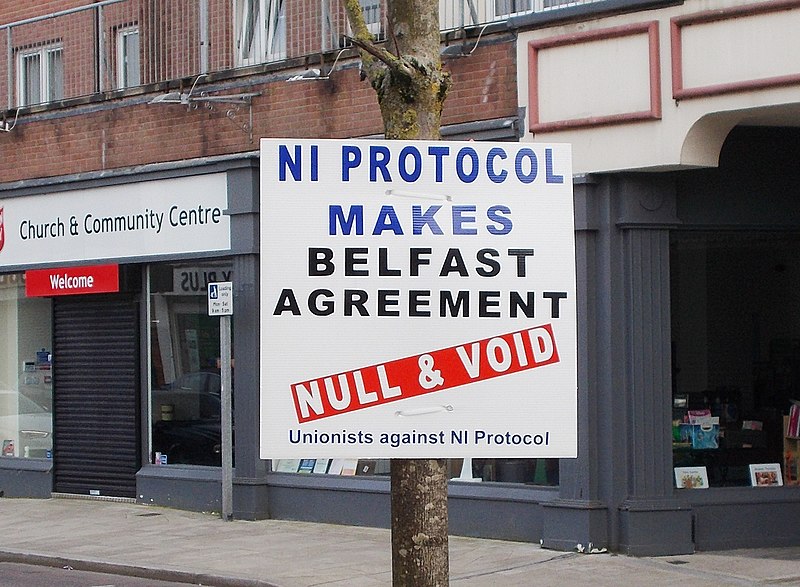 As the government plans to amend the Northern Ireland Protocol, Sheila Lawlor explains that posturing over its sanctity relies on poor history and bad politics.

This week’s announcement that the government will modify parts of the Northern Ireland Protocol, if a negotiated solution to the present impasse fails, prompted howls of moral outrage. That the UK might, unilaterally, amend an international treaty to which it was a party in 2019 was implied to be beyond the pale.  Some legal buffs went so far as to cast doubt on the Attorney General’s legal advice. Leaving aside the motives of the critics, the narrow focus on the sanctity of the protocol is misguided.

Politically and historically, the Northern Ireland Protocol was of a piece with the rash of treaty- making a century ago by the club of Allied leaders, Lloyd George, Wilson, Clemenceau and Italy’s Orlando, after World War 1. They used it to deal with  the defeated powers – Germany, the Austro-Hungarian and Ottoman empires, Bulgaria. The map of Europe was rapidly redrawn under a series of treaties rushed through by the victors.  The same thinking was applied to Ireland to settle the pre-war demands of Unionist and Nationalist. The result, a ‘two state’ solution hardly did the trick, leaving purist Unionists unhappy at being severed from Britain and post-war Republicans in arms against it. In fact the complex rival visions of the future entertained by the many different Irish groups were irreconcilable. The then government believed that the historic province of Ulster (9 counties) should be reduced to six counties to prevent the emergence of a Hibernia Irredenta  in Northern Ireland, ungovernable by the UK and an all-Ireland ‘solution’ which  ditched the Unionists, was politically as well as historically, not an option.

In Northern Ireland the emergency of a dominant Unionist state economically and politically, prompted waves of unrest, and in the decades from the 1960s, the ‘Troubles’ – rioting and the intervention of hard-line paramilitary groups, IRA and Unionist, side by side with the politics of  civil protest by many moderate nationalists. The causes were complex, ideological, political and economic: nationalists met obstacles in taking their place in the Unionist dominated society, while problematic local policing fuelled the paramilitary ranks of the IRA. Neither the British Army, initially brought in to ameliorate matters, nor successive initiatives by Dublin and London, succeeded.

But the 1998 Good Friday Agreement between the UK and Irish governments, and to which politicians from a number of parties signed up along with Sinn Fein, the political wing of the IRA, helped to draw a line under the past. The premise was that there would be no change to the constitutional status quo, and so Northern Ireland would remain part of the UK unless the majority consented to change in a referendum. Thus, we were later to witness a remarkable spectacle of Sinn Fein-IRA becoming a political party, sharing power with former Unionist enemies, symbolised by hard line DUP leader, Ian Paisley and  former IRA man Martin McGuinness, sharing power as first and second minister in 2007.

That new status quo, envisaged by the Good Friday Agreement, was shattered by the EU’s Northern Ireland Protocol. The EU, supported by  Dublin politicians, insisted on retaining Northern Ireland in the  EU Single Market in goods, a bludgeon deployed against the UK first with Theresa May in late 2017, reappearing two years later  in place of May’s doomed deal as her successor sought to extricate himself from the chains in which Brexit’s enemies in the UK parliament imprisoned him and his government, leading to the chaotic scenes  in Westminster of late 2019.

The reality is that the Protocol not only flouts the Good Friday Agreement in principle, but  its consequences have obstructed goods travelling freely from GB to Northern Ireland, held up by compliance, paperwork and delays due to the Irish Sea border.

Indeed, by any ordinary reading the Northern Ireland Protocol’s arrangements are contrary to the Good Friday Agreement’s recognising the constitutional status quo – in that they give EU Single Market law supremacy under the European Court of Justice. The GFA recognises that ‘Northern Ireland remains part of the UK and shall not cease to be so without a majority [vote] of the people of Northern Ireland.’

Rather than re-emerging this week to challenge the legitimacy or good sense of modifying the Protocol, the UK’s vociferous anti-Brexit lobby and Keir Starmer’s Labour Party should abandon attempts to make political capital out of the tense and complex problems encountered in Northern Ireland.  Such problems existed long before the UK joined the EU and endured. They were suspended, if not resolved, by the determination of Dublin and London, working with the political parties in the North, to put differences on ice and share power.  There is no simple solution to Northern Ireland’s troubled past: the best that can be hoped for now  is to restore power-sharing under the GFA, made possible by the recognition of Northern Ireland’s constitutional status unless that is changed by a majority vote.

The critics should also should see that this is not a matter of high-handedly ‘breaking’ an international treaty. The obligation to uphold the Good Friday Agreement and restore the conditions for stable government in Northern Ireland is primary. The EU’s stubbornness, long determination to use the fissures of Northern Ireland’s complex past to undermine Brexit, its insistence on the Protocol, and bad faith in negotiations to tackle  the difficulties, leave little choice but a law to protect the Good Friday Agreement.

In ordinary life, a contract signed under duress can be rescinded. That rule should hold good for the Protocol, which was signed not freely but under duress. Those who now criticize the Prime Minister for talk of abandoning the Protocol include many who threatened Britain’s democracy in 2019, trying to hold Boris Johnson captive to prevent the Brexit for which people had voted in 2016. Agreeing the Protocol in the autumn of 2019 was the means to an end to honour the democratic mandate of 2016, and draw a line under the chaotic conditions to which the EU’s parliamentary cheerleaders had reduced one of the world’s most respected democracies.

The Protocol and its dubious ‘legality’ has failed the test of time, even sooner than happened to the 1919 Versailles Treaty, imposed by the powerful at the cost of peace and the interests of the people they served.