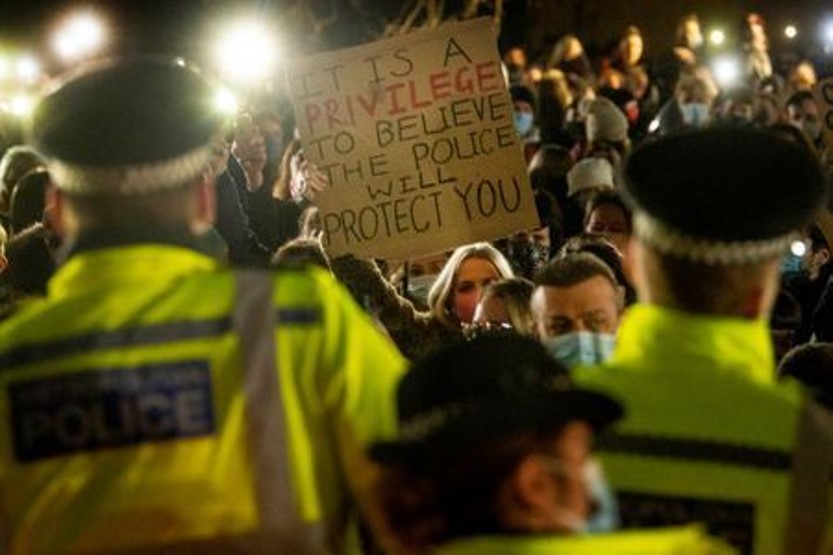 Rather than take cover behind the cause of ‘protecting women’, says Sheila Lawlor, the government should recognise that its own laws have compromised safety on our streets and policing by consent.

As crowds gathered across the country at the weekend to mourn the death of Sarah Everard, abducted and murdered walking home from a friend’s house in London, the focus switched to policing – not, though, the policing of Sarah’s neighbourhood, but that of the crowd at the bandstand vigil in Clapham Common. The Metropolitan Police Commissioner, Cressida Dick, who contends that in dispersing the crowds police were keeping people safe from Covid, rejected calls to resign. The government had little choice but to stand by the Commissioner, who claimed to be enforcing the laws it introduced, so it quickly shifted its focus to the subject of the moment, protecting women’s safety, and joined the chorus from the media, women’s groups, the protestors and some MPs, who have depicted this murder as the latest chapter in a story of male threat and aggression against women.

The PM announced it was time to ‘drive out violence against women and girls’: there would now, he promised, be plain clothes undercover officers outside bars and clubs with funds too for CCTV cameras and lighting for neighbourhoods ‘at risk’. The Home Secretary warmed to theme when she told MPs on Monday that the package of measures introduced by the government including the new Police, Crime, Sentencing and Courts Bill would all help make women safe, recalling in sombre tones that ‘too many of us have walked home from school or work … [hearing] footsteps uncomfortably close behind us …’

Is it right, though, for the government to shift the focus away from the circumstances of the murder and the police reaction to the vigil it prompted to the popular cause of protecting women? Should it be seeking to deflect just concerns about the powers in the new bill?

Few would doubt that making streets and public places safe is a duty of the state, to be carried out by police officers policing with consent. But this country places an even stronger duty on its government to uphold freedom under law, a freedom that is protected by a system of constitutional checks and balances designed to curb the exercise of arbitrary power by the state or its agents. Failure in one takes its toll on the other. In this, the long year of lockdowns, both have taken a battering.

For safe streets the first line of defence is people out and about their daily lives; the second is the thin blue line of officers. Without the millions of men and women going about daily life across this country, to work, shops and bank machines, bars and restaurants, our streets are less safe. Lockdown laws are responsible not only for dismantling this line of defence, but for striking at the second line of defence too, by removing the police forces from the beat to enforce lockdown laws.

The need to enforce the lockdown laws has had other bad consequences. The police themselves, seeking to enforce legislation that is not only draconian, but often ambiguous or contradictory, have been exposed to public acrimony. In one long year of lockdowns, the very notion of policing by consent has evaporated. Police have been challenged and ridiculed by the very people on whose good will they must rely if they are to uphold liberty and protect freedom under law. Even worse, they have prompted contempt, and at times outrage, as happened at the Clapham Common bandstand. There must be something extraordinary about laws which result in police officers breaking up a vigil for someone brutally abducted and murdered, yet standing by when crowds on the rampage tear down statues and vandalise public property, or as with the BLM marches, police officers ‘take the knee’- appearing to genuflect in deference to lawbreaking crowds. There is something dangerously wrong when, by contrast, two women are apprehended for picnicking because they had takeaway coffee cups in their hands when walking at a beauty spot near home, or when burly police officers physically remove a solitary middle aged lady sitting for a rest on a deckchair near the sea. The new Police, Crime, Sentencing and Courts Bill seems, without even the excuse of being rushed, to be no more carefully though than the Covid laws: while honouring manifesto commitments, it will also give greater powers to the police to judge whether an offence has been committed, because someone has caused ‘serious’ annoyance or inconvenience.

The government has a duty to uphold the law and maintain public order: both require orderly and crime free streets. In both the police should play a pivotal role, by policing with the good will of the people they protect, under laws made indirectly by the people through their parliament to uphold their freedoms, including the freedoms they take for granted to live their lives safely. A government which, no matter how unintentionally, erodes respect for policing, deals liberty a body blow. It must restore the normal arrangements for making and scrutinising laws and ensure that in the new Police Bill, the law is clear, that it is proportionate, that it protects without endangering, liberty. There should be no room for judgements by hard pressed officers in the heat of the moment about what constitutes an offence. They and we must know where we stand, and the law must make that clear. Not only is in their interests of a free society but it is in the interests of the police.

Having virtually closed down debate over Covid law, government must take its share of responsibility for the problematic and dangerous policing to which it has reduced the safety and liberty of this land of the free. It is important, of course, that women are protected, but so also should be the elderly, the disabled, the weak, and those who dwell in dangerous areas, but what needs protection more than any of these groups are our freedoms. They are what government is uniquely placed to protect, but also, as now, to endanger and remove. It should end the arbitrary rule, to which the country has been subject for too long, recall Parliament to sit in Westminster under its normal timetable, to scrutinise, convene and seek to get the better of an executive grown careless under its own emergency powers.