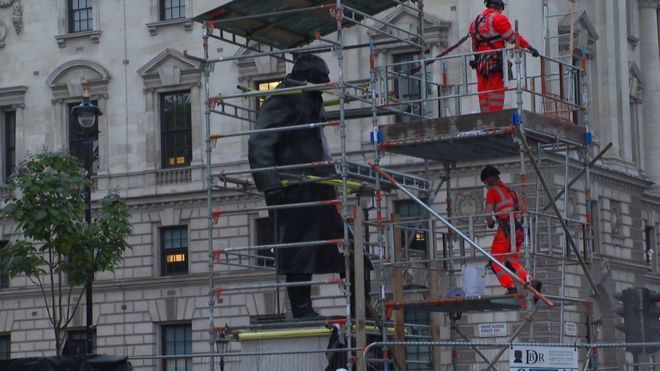 The militant aggression of the ‘Black Lives Matter’ movement has left many people in Britain bemused. First came the demonstrations which flouted Covid rules, then the tearing down and disposal of a statue in Bristol and the defacement of public monuments. Now the demand is for the history of this country to be re-shaped in the image proposed by the protagonists, ‘decolonised’ with minority groups centre stage, the system of the time and its oppressors denounced.

For many people the worst part of all this was that the public authorities, entrusted to uphold the law on our behalf, failed to do so. Police officers appeared to stand by as the public artefacts that bear testimony to Britain’s complex past were torn down or defaced. Some seemed to join the demonstrators in spirit by bending (‘taking’) the knee; London’s Met Commissioner, Cressida Dick allowed them to do so. Politicians lost little time in showing their own solidarity: the statue torn down in Bristol, suggested the town’s mayor, had had it coming, though later he softened his stance, whilst Labour’s leader, Keir Starmer and his deputy took a step towards farce when they posted an image of each taking the knee in a parliamentary office. Not to be outdone, London’s mayor, Sadiq Khan heralded a London version of Mao’s cultural revolution, with a ‘Commission for Diversity in the Public Realm’ to overhaul the landmarks and street names of the capital and recommend what legacies will be celebrated, and to focus on ‘increasing representation among Black, Asian and Minority Ethnic communities, women, the LGBTQ+ community and disability groups’.

It is unlikely that the police are fully aware of the agenda of the Marxist inspired BLM, which wants nothing less than to abolish capitalism and imperialism, end western family structures and to work towards the abolition of the police. So much its websites make clear. But even for the many on the left today who do not share these extreme positions, the individual is seem as part of a group identity, to be subsumed in the segregated compartments of the politics of the left: women, the disabled, or the favoured acronyms BAME and LGBTQ.

History is now to follow the statues, the demand being for an even more militant makeover of Britain’s political, historical and cultural identity than has already taken place. The story of the past must be re-shaped in the image proposed by the protagonists, its political culture, its traditions, indeed way of life sacrificed to the hatreds of a militant sect.

There is much in our history we might now find abhorrent, much we might do differently today. The past is another country distant and strange. Its actions, judgments, approach differ to our own. But that does not mean we should erase it, or view it through the lens of the present. It is to be studied and understood on its own terms, and we should be left to reach our own conclusions. When, instead, we deliberately hold the mirror of the present to another age, we will distort it, and all the more so when we are selective about the details on which we focus. Each period is like a gigantic jigsaw of thousands of pieces. Each piece taken on its own is incomprehensible, unless seen in it context, as part of the whole picture.

Teaching this wider view, about a world beyond our own is not only important educationally, it is valuable in itself. It allows each of us to stand back from the sections, to look dispassionately at the whole. Teaching about a world beyond the self has been a central aim of education since classical times. It has brought many benefits, not least to the shaping of a free society, ruled not by passion but by law.

Until now Britain’s politics has escaped the curse of sectionalism that in different ways scarred the political course of many continental neighbours, and that of the US. That may be because at heart this country’s ruling ethic has been that all lives matter – a principle deeply rooted in principle and practice in the Christianity that came to its shores in repeated waves since Roman times. Though Britain may today be a secular society, in its system of belief, each person’s life matters, and each person’s freedom is protected under law. There have been failures, but in an educated and responsible democracy, these can be put right.