A Question of Identity

Professor Tim Congdon CBE explains that though the newcomer may seem brash, its goal is noble. It will now be for the prime minister to clarify the status of Britain vis-a-vis the EU.

In widely-quoted remarks at the European Union summit on 27th May, David Cameron called Brussels ‘too big, too bossy, too interfering’ and put forward a principle. This was that the EU should work on the basis of ‘“nation states” wherever possible, Europe only where necessary’. If his emphasis on the nation state were meant seriously, his words would be much more than rhetoric. Cynicism about David Cameron’s occasional Euroscepticism may be fully justified, given his past abandonment of a ‘cast iron guarantee’ to hold a referendum on the Lisbon Treaty. However, the new Cameron principle is not his first or most serious challenge to EU integration-ism. In his January 2013 Bloomberg speech, the speech in which promised a 2017 in/out referendum on EU membership, he repudiated the phrase ‘ever closer union’ in the 1957 Treaty of Rome.

To the architects of the European Economic Community (which become the EU in the 1993 Maastricht Treaty), such as Jean Monnet and Paul-Henri Spaak, the notion of ‘ever closer union’ defined the EEC/EU. To them, and also to many later European leaders and statesmen, nations that participated in the European project had made an irrevocable commitment to deepen and broaden their togetherness. The impression being given is that David Cameron favours something like De Gaulle’s conception of ‘Europe des patries’ and is opposed to the Monnet/Spaak vision of a United States of Europe. In a ‘Europe des patries’ nation states agree at an inter-governmental level on matters of common interest, but with national sovereignty preserved; in a United States of Europe extensive powers (i.e., the ‘competences’ mentioned in successive EU treaties) have been transferred to federal institutions and assumed by a supra-national bureaucracy, with this bureaucracy superior to national parliaments and governments, and national sovereignty so pooled and diluted that it is no longer meaningful.

Deep constitutional issues are raised by the contrast between an inter-governmental union and a federal union on the US model. In one key respect the United States of America is far more unified than our own nation, the United Kingdom. The result of the 1861 – 65 Civil War, and decisions reached in court cases afterwards, established the principle that no state of the USA could leave the Union. (Yes, it’s that final.) As a result the USA is more cemented together than the UK, even though the UK is usually characterised as one of the world’s most ‘unitary’ states and the USA as a federation. With Scotland debating its own independence, it is obvious that the UK – a nation without a written constitution – is far more flexible and relaxed about these matters. (I don’t know if the county of Somerset could leave the UK, but don’t know who would stop it. People from Yorkshire may have views on the subject different from other English people, just as Texas is a little peculiar in the USA. But – repeat – the constitutional understanding is that Texas cannot quit the American Union.)

This is not a new debate, and no doubt politicos, hacks and anoraks can waffle at each other endlessly about the finer nuances. (And, let us be clear, the waffling can degenerate into something altogether more horrid, as the Biafra war, the break-up of Yugoslavia and the current tensions in the Ukraine demonstrate.) At any rate, DeGaulle’s ‘Europe des patries’ cannot be equated to or reconciled with the Monnet/Spaak ‘United States of Europe’. They are different things, full stop.

Mr Cameron might dispute that the purpose of ‘the European project’ is to forge a United States of Europe. He must open his eyes and ears. In November 2012 the German Chancellor, Angela Merkel, told the European Parliament ‘Of course the European Commission will one day become a government, the European Council a second chamber and the European Parliament will have more powers – but for now we have to focus on the euro and give people a little more time to come along.’ And what role, might one ask, is left in Mrs Merkel’s view for national parliaments or for nations in which ‘the Queen in Parliament’ is meant to be the ultimate source of constitutional authority?

In December last year the former Lord Chief Justice, Lord Judge, cautioned that the European Court of Human Rights had indulged in too much ‘activism’, which was creating ‘a very serious problem’, and recalled that Parliament must have ‘ultimate sovereignty’. The next month Dean Spielmann, president of the ECHR, dismissed Lord Judge’s observations and said that the UK had not had ultimate sovereignty, on the judicial front, since the European Communities Act was passed in 1972.

A few weeks later Mrs. Viviane Reding, vice-president of the European Commission, said that Cameron’s bid to curb immigration from the EU was incompatible with EU membership. For good measure she said that the majority of new laws now came from Brussels and Strasbourg, not Westminster. Further, to quote directly from her website, ‘strengthening Europe and strengthening Europe’s legitimacy can be best done by turning our Union into a United States of Europe. As in the U.S., we will need a two-chamber system for the United States of Europe. A durable political Union with a strong government (the Commission) and two Chambers: the European Parliament and a ‘Senate’ of Member States. This European government must be accountable to the directly elected European Parliament.’

We must ask, ‘in what version of the EU did David Cameron believe so deeply that he could campaign for it heart and soul?’ For the De Gaulle conception, in which the UK (well, England and associates if the Scottish vote goes the wrong way) continues to exist and in the extreme could withdraw to re-assert full national sovereignty? Or for the Monnet/Spaak approach, in which ultimately the UK/England would be like a state in the American union? It must be emphasized that in a Monnet/Spaak United States of Europe the British government would be no more than a regional authority subordinate to higher federal institutions. Constitutionally, the danger would arise of a replication of the American situation, so that the UK could not leave the new nation, the United States of Europe, of which it was merely a part. Whether the Queen was in Parliament or not would cease to matter.

To give Mr Cameron his due, the Bloomberg speech did offer vows to parliamentary sovereignty. He said that in his view, ‘There is not a single European demos. It is national parliaments, which are, and will remain, the true source of real democratic legitimacy and accountability in the EU.’ Bluntly, that assertion of national parliamentary sovereignty is the antithesis of the notion of a United States of Europe articulated by Merkel, Reding, Barroso and scores of other Continental politicians, and held by Monnet, Spaak and other visionaries in the 1950s. It cannot be overlooked that the Lisbon Treaty, with its long list of competences transferred to EU institutions, is inconsistent with the Cameron 27th May principle of ‘“nation states” wherever possible, Europe only where necessary’. Indeed, the incompatibility of the Lisbon Treaty with the core doctrine of the British constitution (i.e., the doctrine of ‘the Queen in Parliament’) is blatant. That explains why so many thinking and serious conservative British people were appalled when, in November 2009, Cameron broke his cast iron guarantee to have a referendum on the Lisbon Treaty if he won the 2010 general election. Can’t he see that? Can’t he understand their anger and resentment?

Quite a few of those conservative British people would at one time have been wholehearted Conservative Party voters. Many of them have now moved their allegiance to the UK Independence Party. UKIP may be new and brash and rather unattractive in many ways, but its members are bound together by commitment to a noble cause, the continued existence of the nation of which they are citizens. In yesterday’s Newark by-election it came second, but in a supposedly safe Conservative seat that was a remarkable achievement. Apparently, many Labour and LibDem supporters voted tactically for the Conservatives to keep UKIP out.

UKIP has everything to play for. In the Bloomberg speech Mr Cameron said that the hard questions should not be ducked, although a fair interpretation of the speech was that he was doing as much ducking of hard questions as he could get away with. Since then the words and phrases have veered all over the place, moving with the latest events, the current audience and the most up-to-date opinion polls. As Nigel Farage put it in his 29th May article in The Daily Telegraph, ‘Out of the ashes of his third place in the European elections, a new and stoutly Eurosceptic David Cameron appears to have emerged.’ The real trouble here is that we want to believe that our Prime Minister has a settled, well-organized, well-thought-through and intellectually consistent position on the ideal relationship between the UK and the EU. All the evidence is that he has no such position. He appears to make things up as he goes along.

Is he opposed to the UK belonging to the long-planned United States of Europe? Yes or no? If he cannot give a straight answer to that question, he has not sorted out the identity and status of the nation of which he is, in some sense, ‘the leader’. The question is so basic that many people might then feel he does not deserve to be its leader. But – given the even worse current top brass in the Labour Party – he might still be Prime Minister in June 2015. Will he then campaign heart and soul for ‘national parliaments’ to remain ‘the true source of real democratic legitimacy’ in the EU? Or will he campaign heart and soul for a fully-fledged United States of Europe, in which the UK (assuming it is still the UK) has the same relation to the federal powers in Brussels that Illinois or Florida have in the USA to the federal powers in Washington?

*Professor Tim Congdon CBE is an economist. He founded Lombard Street Research in 1989, where he was managing director (until 2001) and chief economist (from 2001 to 2005). He served for five years (1992-97) as a member of the Treasury Panel of Independent Forecasters, the ‘Wise Men’. He contributes frequently to the financial and national press, has written Providing for Pensions, Savings in a Free Society for Politeia and is author of Money in a Free Society (2011). 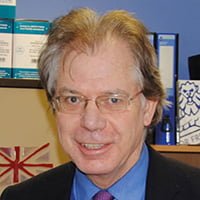